I have been writing articles about self-employment and tech for a couple of years now. During that time, a lot of people have reached out to me since I have inspired them to take the leap from being hired to becoming self-employed. One of my most popular articles is “The Differences Between Being Hired and A Self-employed Consultant” (only available in Swedish). I have been contacted by people in the beginning of my writing and then again a year later, during which time the only thing that changed for them was that they went from “I want to become a freelancer” to “now I really want to become a freelancer”. I understand that it is a big step and some people will make the journey themselves and some will want to have help and I want to support anyone who wants to take the leap. This was our thinking which has led up to this blog article. We want to make the leap smaller and easier to take! By offering a middle ground and acting as a stepping stone between being hired and self-employed, our hope is to further challenge and disrupt the tech consultancy market.


So we hereby present to you, without further ado, the new type of employment in the IT consultancy market and a pivot from the usual career path of tech talents: 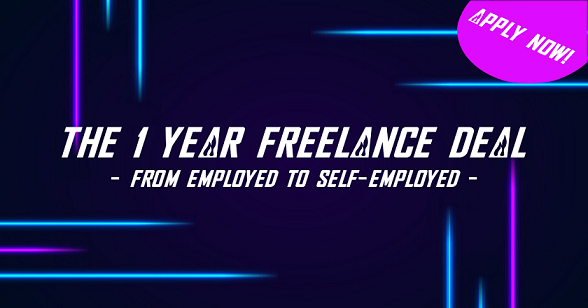 However, to be honest, I was reluctant to hire other consultants (i.e. to start a consultancy firm) at first since it stands against my ideology. If there is one thing I dislike, then that is IT consultancy firms’ business models since I believe that they take advantage of and ultimately kill the passion of tech talents out there. There are many ways in which they do this, and I will write a whole article about it, but a couple of clear examples are that they:

They always keep you coming for more (not paying you enough to leave and always dingling big shiny bonuses at the end of the year so you will get stuck in thinking “one more year” all the time). If they decided, you would never leave your hamster wheel at all. We, ourselves, have made the journey from being hired IT consultants to self-employed freelancers so we believe that we know what we are talking about. I have tried to explain the differences between being hired versus self-employed from an objective perspective here.


The goal of my writing from the start has always been to tell the truth, inspire others and improve the job market in favor of the individual instead of the big companies. I want to minimize the information supremacy that I believe that companies in general and IT consultancy companies in particular have over the individual. The information is both difficult to obtain and understand, which tilts the market and, as in gambling, the house (i.e. the big companies) always wins.


I want to catalyze the market to become more open and focused on productivity rather than on diplomacy, secrecy, lock-in effects and imaginary thresholds. Do we not all just want the buyer and the supplier to meet in the market and exchange their services as frictionless as possible? So why do we not just try to minimize all of the middle-hands, bureaucracy, lies, sharp elbows, hierarchy, sponsorships, ass-licking, ladder-climbing, and other rent-seeking activities in the ineffective approach of trying to get things done that we currently are exposed to in the normal job market? Is there anyone who thinks the current job market works in the most optimized way for achieving productivity - for actually getting things done? I do not think so and that is why we are challenging it. By launching “the 1 year freelance deal” our hope is that we will make the leap a lot easier to take for the individual and the market less tilted in favor of the big companies and improved as a whole.

So, you can see why I could never look at myself in the mirror if we had a “normal” IT consultancy firms’ business model. However, me and my partner in crime have come up with the perfect setup! We slice the employment on the length and not on the width. Meaning that in our company, as opposed to in ALL other IT consultancy firms, the hamster wheel has an end, which also is the ultimate goal. Consultancy firms usually compete in salary levels, trying to hypnotize you with their ‘amazing’ work culture, work in different industries, have some charismatic ‘sect leader type’ CEO or otherwise try to stand out from their competitors. Not us. We will rewrite the whole employment setup! We stand out from other firms in a whole new dimension - the length and the goal of the employment! 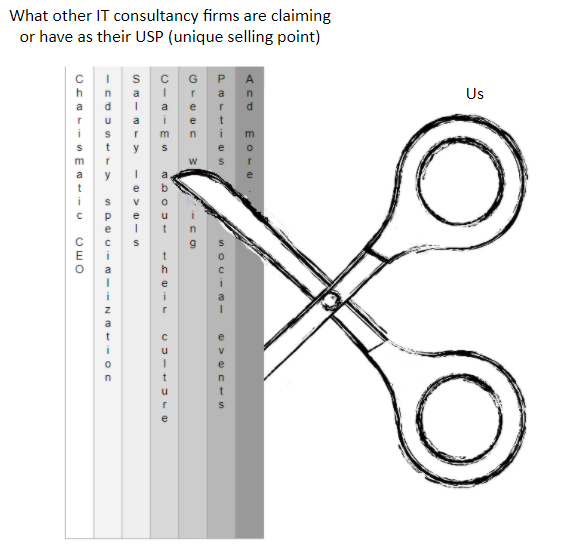 Other IT consultancy firms might claim or have (whether they claim it or not) unique selling points which make their employees choose them. It could be a charismatic CEO, industry specialization, salary levels, claims about their work culture, green washing, parties and social events and more. Or you might just choose them because you know someone who works there. Either way, our USP is nothing like that. Our USP is that the employment is limited in time and with the goal of becoming self-employed. By doing this, we hope to disrupt the whole market and challenge ‘our competitors’ in completely new dimensions instead - in both the length and goal of the employment, which to my knowledge has never been done before. 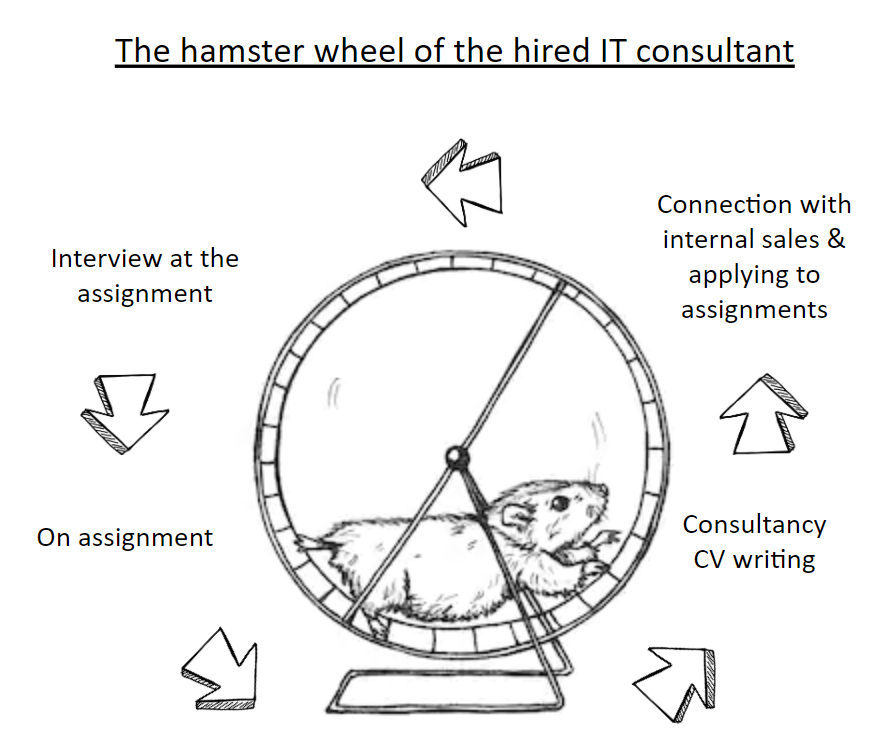 As a hired IT consultant at a ‘normal’ IT consultancy firm, you might stay trapped in the hamster wheel forever. After a long time you MIGHT become a partner and focus more on sales and/or recruiting or such, but that takes many years (differs at different IT consultancy firms).


Other tech/IT consultancy firms’ goal is to:

Our goal is to:

This is something I can stand up for, be transparent about and believe in, which makes me extremely motivated. I believe that you could assume that someone’s intentions, who is driven by their ideology, are true (i.e. the same as they claim) because they are driven by their ideology and, as such, do not have a hidden agenda. It is the change which is motivating us and not some business opportunity (as opposed to all other IT consultancy firms). With that said, we do plan to make some profit on this (I mean, we are not able to work as a charity), but we are confident that it will be a financial win-win scenario both for the individual and for us. Thus:

If we are just able to make the IT consultancy jobs market a bit more transparent (the worst case scenario), then that is also extremely motivating for us so we see it as a win-win situation either way!

The 1 year freelance deal is not a wheel, but rather a rollercoaster where the exit is the ultimate goal for both parties. Instead of having to feel bad about quitting, (which ALL other companies make you feel) we celebrate it! It is our mutual goal the whole time.

Here we will show you our analysis behind this - and we want to be completely transparent about the whole setup! I have never seen any point in not discussing and comparing salaries, concrete calculations and real-life examples. Would it not be motivating to actually be able to be completely honest with your employer and the employer being completely honest with you as well for a change? At least we feel and believe in this. After all, if you are going to start your own company and stand on your own two feet you need to learn this sooner or later so let us just show you how we calculate everything right here!

*A working month is on average 171 hours according to: arbetstimmarpermanad.se
**In Sweden, we are sick 3,9 % of the ordinary working time according to: ekonomifakta.se
***We assume an average risk of 3 months during 1 year during which time an average employee is unassigned. This is in case of lack of suitable assignments or just bad luck and so forth. Being unassigned means not vacation, but rather to work on our side-projects. For example you could work at our company teamo.se with packing teas or developing the website, while searching for an assignment.
****With a salary of SEK 50 000 per month and my personal number 91-01-13 we calculated the costs of having an employee here: verksamt.se


Note that these are not exact figures (since that is a really complicated calculation) but it is a summary with the purpose of being transparent and illustrating the main point, which is that it is a good deal for both parties. We have not drafted a contract in detail yet (we do that if we are so lucky as to find such an individual) but we assume that we will offer a 'provanställning' during 6 months, then full-time hire. Notice of leave 1 month for both parties during the provanställning and no 'tjänstepension' (but general pension is of course included). The reason for this is that we believe that there are lots of better setups for saving for your pension when you are self-employed and that you should choose for yourself how you want to do it. For example, we use "direktpension", which we can help you set up in your own company if you want. Read more here at Avanza.


As you can see - in the best case scenario we earn 19 571 SEK every month during one year on one employee and the employee earns 50 000 SEK a month. However, of course there are a lot of risks, which we should not underestimate. Nevertheless, we are betting that it is worth it and that we are that good at finding and helping the right individuals and that you are that good at the assignment. The right individuals we are referring to would be tech talents who really want to become self-employed. However, as with any company, it is always a calculated risk involved. We hope and think that we will make a profit on this, but it is not our main goal. After we see how this goes we might increase the starting salary level, but for now we need to make sure to cover the risks.


The risks which we cover for you (and which you yourself will need to have cover for later when you are self-employed) are among others:

There are of course insurances for everything and in some cases a reasonably sized economic buffer is enough.

However, the most important and motivating factor of breaking free and becoming self-employed for me is to feel that I am continuously working towards a bigger goal - MY OWN long-term goal and nobody else’s. As self-employed, you are able to do this mostly thanks to the fact that you are earning so much more and are able to save up a lot of money in your company. The money buys freedom. I can start and manage my own side-businesses in between and in parallel with having assignments and also take a long time off work in between assignments to focus on myself and my goals. As an example, I gave myself six months paid vacation last year. In addition to this, I love tea - I am a tea person - so we manage and own a little tea brand, called Téamo. I could not have done all of these things if I were hired - I would not have had neither the money nor the time or the business knowledge to do it.


Please reach out to me if you are interested in this deal or if you have questions or thoughts on this! We are very interested in hearing what you have to say :) contact us at: pm@annaleijon.se


If you have not checked the job advertisement for the 1 year freelance deal out yet, now is the time to do so! :)


Good luck in the continuation of your career no matter which path you take!